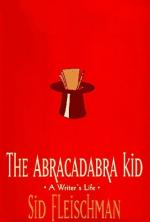 Fleischman's interest in performing magic tricks was the major focus of his early years.

He became adept in handling cards and other standard props. He began to learn that human beings enjoy being deceived during these performances, and that they are very susceptible in many ways. This susceptibility would be proven when, while publishing a weekly newspaper, he and his friend thought they were perpetrating a harmless hoax by reporting the discovery of a twenty-seven-inch extraterrestrial man.

The story was taken for absolute truth by many readers and received nationwide publicity.

The primary theme of The Abracadabra Kid is the process by which a writer is formed. Fleischman wants to acquire with words a skill comparable to that which he had developed in his magic.

An autobiography focuses on the character of its author. Fleischman shows how he became an astute observer of the...