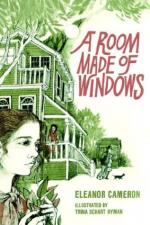 A Room Made of Windows Themes & Characters

Eleanor Cameron
This Study Guide consists of approximately 10 pages of chapter summaries, quotes, character analysis, themes, and more - everything you need to sharpen your knowledge of A Room Made of Windows.

The central theme in A Room Made of Windows concerns recognizing and accepting change as an inevitable part of life. Julia resists change, especially her mother's plans for remarrying, because the marriage would displace Julia as the priority in the life of her mother, Celia Redfern; it would also displace her from her beloved room made of windows.

Julia wants to be a writer and considers her room and the desk her father made for her essential in achieving this goal.

Her father's dream was to be a published writer, and she has adopted his life goal. She holds an intense affection for his memory as a perfect man. His photograph as a handsome, robust man sits on her desk, reinforcing this view of him.

Her mother's fiance, Phil Stanhope, seems pale and weak compared to the photograph and memory of her father.

More summaries and resources for teaching or studying A Room Made of Windows.

A Room Made of Windows from Gale. ©2005-2006 Thomson Gale, a part of the Thomson Corporation. All rights reserved.