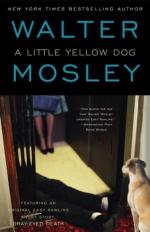 Walter Mosley
This Study Guide consists of approximately 16 pages of chapter summaries, quotes, character analysis, themes, and more - everything you need to sharpen your knowledge of A Little Yellow Dog.

Mosley's series hero Easy Rawlins is critically acclaimed as a breakthrough character in mystery writing. Easy is a unique, well-drawn adaptation of the stock tough private eye to an AfricanAmerican social milieu and historical setting. He is at the same time created from universal elements of human nature.

In spite of a harsh childhood of poverty, Easy displays a keen knowledge of the streets, a strong moral sense, and a fine intelligence. He loves to read, and his interests are as diverse as Ian Fleming, Emile Zola, and Marcus Aurelius.

Easy no longer dreams of "making a fortune on speculation," as he once did.

He greatly appreciates the respectable home and work life he has managed to establish, thanks to his job as head custodian. Easy's efforts to survive in his position include identity shifts to fit the situation. Easy adopts phony names, varies his speech, play-acts the...

More summaries and resources for teaching or studying A Little Yellow Dog.

A Little Yellow Dog from Gale. ©2005-2006 Thomson Gale, a part of the Thomson Corporation. All rights reserved.