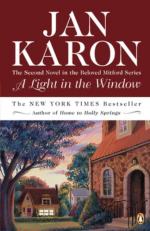 Writing Techniques in A Light in the Window

Jan Karon
This Study Guide consists of approximately 17 pages of chapter summaries, quotes, character analysis, themes, and more - everything you need to sharpen your knowledge of A Light in the Window.

Much of the novel follows this pattern: separation, loneliness, and introspection, followed by joyful, but brief, reunions.

The effect is a gradual change in Father Tim's character. No longer does he find refuge in religion and introspection. He needs Cynthia to complete his life and make it whole.

Karon breaks her twenty-one chapters into brief segments, some no longer than a paragraph. The effect is like reading Father Tim's diary or daily journal, except that Karon writes from a third-person point of view, rather than first person.

Several episodes do not further the plot, especially those involving Miss Sadie's reminiscences over her mother's hats and the fresco in the Ferngate ballroom.

Except for brief mention, Homeless Hobbes remains in the cabin at the edge of town, and Absalom Greer stays in his country store. Both of these men assume surrogate ministries that Father Tim seems unable to fill...

More summaries and resources for teaching or studying A Light in the Window.

A Light in the Window from Gale. ©2005-2006 Thomson Gale, a part of the Thomson Corporation. All rights reserved.