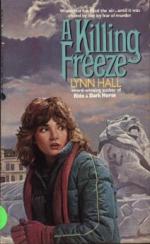 Lynn Hall
This Study Guide consists of approximately 13 pages of chapter summaries, quotes, character analysis, themes, and more - everything you need to sharpen your knowledge of A Killing Freeze.

Events take place in the environs of Harmon Falls, a small Minnesota town.

It is wintertime, and snow covers the ground and buildings in and around the town. For several years, Clarie's father has organized the Winter Fest for Harmon Falls, which draws tourists and local people to contests such as snowmobile racing and ice carving.

The Winter Fest serves as a way for local business people to make money: Although the events of the Winter Fest themselves do not bring in much money, those who attend the festival tend to buy goods at the local stores, including snowmobiles from Clarie's Dad.

The success of the Winter Fest is essential to the merchants making a profit on the year, whose success this year is threatened by the deaths of Mrs. Amling and Richard Moline.

Most of the events in A Killing Freeze take place outside, in the cold...

More summaries and resources for teaching or studying A Killing Freeze.

A Killing Freeze from Gale. ©2005-2006 Thomson Gale, a part of the Thomson Corporation. All rights reserved.