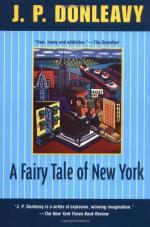 Any discussion of a Donleavy novel begins with tone. What are we as readers to make of the hero and his response to the world around him? Is Christian's hostility to New York, rich people, and America justified because he was an orphan and an outcast? Does the author intend it to be? What other thematic issues are engaged by the novel.

1. Are violence and crime as exclusively American problems as the novel implies? Is the criticism of American tolerance for violence valid?

2. Should the repeated chances to succeed given to Christian by Howard How and Clarance Vine be seen as satiric portraits of the stupidity of American businesspeople, or are they charitable second chances given to an unregenerate person who seems bent on wasting his own talents?

3. Is Christian's insensitivity to Fanny's impending death to be taken as cruelty, self-centeredness, or dread of the very...