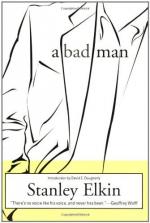 Get A Bad Man from Amazon.com
View the Study Pack
Short Guide
Order our A Bad Man Short Guide

Stanley Elkin
This Study Guide consists of approximately 8 pages of chapter summaries, quotes, character analysis, themes, and more - everything you need to sharpen your knowledge of A Bad Man.

Many of the supporting characters in A Bad Man are effective representations of literary types; the names of Feldman's three victims — Victman, Freedman, and Dedman — suggest the allegorical qualities of the novel. Similarly, many of the prisoners represent essentially symbolic intentions rather than individually developed characterizations. The power of the novel as a representation of life rather than as thematic manifesto depends on the conflict between two powerful antagonists, Feldman and Warden Fisher.

These two apparent opposites are surprisingly similar. Their differences are obvious but their similarities are subtle and substantive.

When Feldman enters the prisonlabyrinth, he immediately becomes the Warden's special project. Ostensibly out to reform him, Fisher tries to convince Feldman that his belief, that people should seek the exceptional, the extraordinary, in their lives is wrong.

More summaries and resources for teaching or studying A Bad Man.

A Bad Man from Gale. ©2005-2006 Thomson Gale, a part of the Thomson Corporation. All rights reserved.