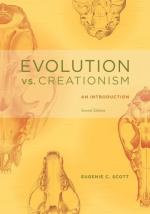 This Study Guide consists of approximately 112 pages of chapter summaries, quotes, character analysis, themes, and more - everything you need to sharpen your knowledge of Creationism vs. Evolution.

" Creationism is the doctrine that matter and all things were created, substantially as they now exist, by an omnipotent Creator, and not gradually evolved or developed."
"Evolution is the continuous genetic adaptation of organisms or species to the environment by the integrating agencies of selection, hybridization, inbreeding, and mutation."
Webster's Encyclopedic Unabridged Dictionary of the English Language, First Edition, 1989

In August 1925, John T. Scopes, a teacher from Dayton, Tennessee, was brought to trial for teaching Charles Darwin's theory of evolution to his high school biology students. The teaching of evolution violated a Tennessee state law which mandated that in Tennessee public schools only divine creation could be presented by teachers as an explanation for the origin and development of life on earth.

When Scopes announced that the gifted and nationally famous criminal defense lawyer Clarence Darrow would be defending him, the prosecution secured...

More summaries and resources for teaching or studying Creationism vs. Evolution.

Creationism vs. Evolution from Greenhaven. ©2001-2006 by Greenhaven Press, Inc., an imprint of The Gale Group. All rights reserved.