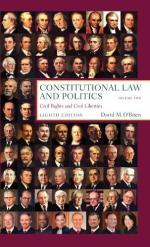 This Study Guide consists of approximately 79 pages of chapter summaries, quotes, character analysis, themes, and more - everything you need to sharpen your knowledge of Civil Liberties.

PHRASES ECHOING THE theme of liberty run through American history and culture as surely as a river runs toward the sea. Americans cherish liberty, and the United States was founded on the understanding that people are entitled to it.

To promote the common good, however, America's national, state, and local governments may adopt laws and rules that curtail freedom. These legal limitations generally reflect the wishes of the majority of the citizens, who elect representatives to govern the country. Everyone must follow the limits set by the majority-elected government, even people who disagree with them. Those who think they should be free to use illegal drugs, for example, will still be arrested if police find drugs in their possession. People who want to drive sixty-five miles per hour down a thirty-five-mph...

More summaries and resources for teaching or studying Civil Liberties.

Civil Liberties from Lucent. ©2002-2006 by Lucent Books, an imprint of The Gale Group. All rights reserved.