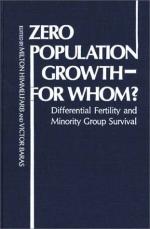 This encyclopedia article consists of approximately 1 page of information about Zero Population Growth.

Zero population growth (also called the replacement level of fertility) refers to stabilization of a population at its current level. A population growth rate of zero means that people are only replacing themselves, and that the birth and death rates over several generations are in balance. In more developed countries (MDC), where infant mortality rates are low, a fertility rate of about 2.2 children per couple results in zero population growth. This rate is slightly more than two because the extra fraction includes infant deaths, infertile couples, and couples who choose not to have children. In less developed countries (LDC), the replacement level of fertility is often as high as six children per couple.

Zero population growth, as a term, lends its name to a national, non-profit organization founded in 1968 by Paul R. Ehrlich, which works to achieve a sustainable balance between population, resources, and the environment worldwide.

Zero Population Growth from Gale. ©2005-2006 Thomson Gale, a part of the Thomson Corporation. All rights reserved.