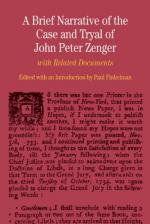 This encyclopedia article consists of approximately 7 pages of information about Zenger, John Peter.

Printer and journalist, pioneer of freedom of the press

" . . . They answered by Thomas Bunt, their Foreman, Not Guilty. Upon which there were three Huzzas in the hall which was crowded with people, and the next day I was discharged from my imprisonment."

John Peter Zenger was a German-born printer and journalist who published the New-York Weekly Journal. The newspaper was a political forum for colonists who opposed the policies of New York governor William Cosby. Although Zenger did not write the articles he published, he was responsible for their content. Charged with libel (making a false statement that exposes another person to public contempt) in 1734, he was arrested and held in jail for ten months. After he finally went to trial his lawyer, Andrew Hamilton, won an acquittal (not-guilty verdict...