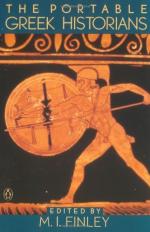 This encyclopedia article consists of approximately 5 pages of information about Xenophon.

Xenophon led a Greek army on a harrowing retreat across Asia Minor, then wrote a vivid account of the event that is still being published and read today, almost 2,400 years later. Exiled from his native city of Athens for most of his life, Xenophon wrote prolifically on a variety of subjects. He is the most celebrated of the early Greek historians.

Born in the Greek city-state of Athens, Xenophon became a pupil and companion of the famous Greek philosopher Socrates. He was also trained in horsemanship, which may indicate that his father held considerable wealth and probably land. Following the death of King Darius II of Persia, Xenophon became involved in the struggle of Darius’s two sons over the succession to the Persian empire. The elder son, Artaxerxes, became king, but the younger son...

More summaries and resources for teaching or studying Xenophon.