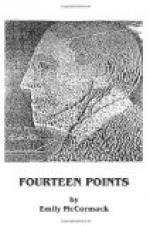 Introduction: On January 8, 1918, President Woodrow Wilson addressed the U.S. Congress and issued his famous Fourteen Points address, in which he outlined the American terms for peace that were required to end World War I. The speech outlined Wilson's ideas for national self-determination and sovereignty. The fourteenth point, which called for the establishment of "a general association of nations," led directly to the formation of the League of Nations, the precursor to the United Nations.

Given by President Woodrow Wilson

Gentlemen of the Congress:

Once more, as repeatedly before, the spokesmen of the Central Empires have indicated their desire to discuss the objects of the war and the possible basis of a general peace. Parleys have been in progress at Brest-Litovsk between Russian representatives and representatives of the Central Powers to which the...

Woodrow Wilson's Fourteen Points from Macmillan. Copyright © 2001-2006 by Macmillan Reference USA, an imprint of the Gale Group. All rights reserved.