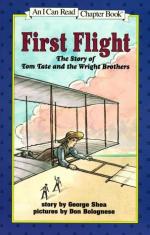 Wilbur and Orville Wright built and flew the airplane that made the first controlled, powered flight in December 1903. Their design was shaped both by their extensive knowledge of others' work on aeronautics and by their own careful research on engines, propeller design, and control systems. They went on, in 1908-12, to play a key role in popularizing the new technology.

Born near Dayton, Ohio, during the last third of the nineteenth century, Wilbur and Orville Wright brought business acumen, mechanical skill, and disciplined minds to their experiments with flying machines. They closely followed the work of Otto Lilienthal (1848-1896) and Samuel Pierpont Langley (1834-1906) and, most importantly, corresponded extensively with Octave Chanute (1832-1910). Chanute, a French-born aviator living in Chicago, provided the Wrights not only with news of his own experiments with...