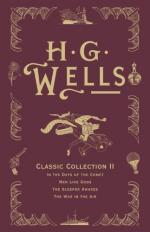 This encyclopedia article consists of approximately 9 pages of information about Wells, H. G..

British writer H. G. Wells made significant contributions to the literary genre of science fiction. Although science fiction was not new to the modern age—scholars have traced its roots back to ancient mythology—writers of scientific fantasy had a profound influence in the late nineteenth and twentieth centuries. For instance, spaceflight pioneers Hermann Oberth (1894–1989; see entry) and Konstantin Tsiolkovsky (1857–1935; see entry) read science-fiction novels and stories by such writers as Wells and French novelist Jules Verne (1828–1905). Most writers at that time, however, concentrated mainly on bizarre tales of alien beings, spaceships, and trips to the Moon and other worlds.

A committed socialist (advocate of state control of production and services), Wells provided an added dimension in his novels, which he called scientific romances: He depicted the dark side of human nature and...