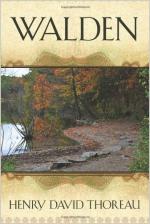 Walden - Research Article from Literature and Its Times

Henry David Thoreau was born in Concord, Massachusetts, in 1817. His family moved away several times but always returned to the small New England town. In the 1830s and 1840s, Concord was a hotbed of activity for reformers of all types. Thoreau himself became a member of a group of thinkers and reformers called the Transcendentalists. Thoreau devoted his life to living out Transcendentalist ideas, which reacted against perceived negative changes taking place in the United States.

Events in History at the Time of the Narrative

The young United States. The early 1800s was an exciting period for Americans. The United States had not lost to the British in the War of 1812, regarded by some as the "Second War of American Independence" (Nash, p. 324). After the war, England's influence dimmed and a new sense of patriotism enveloped Americans, who began to form their own identity...

More summaries and resources for teaching or studying Walden.

Walden from Gale. ©2008 Thomson Gale, a part of the Thomson Corporation. All rights reserved.