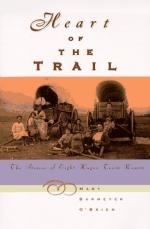 This encyclopedia article consists of approximately 1 page of information about Wagon Train.

One of television's most illustrious westerns, Wagon Train wedded the cowboy genre to the anthology show format. Premiering in 1957, when the western first conquered prime time, Wagon Train told a different story each week about travelers making the long journey from St. Joseph, Missouri, to California during the post-Civil War era. Such guest stars as Ernest Borgnine and Shelley Winters interacted with series regulars: the wagonmaster (first played by Ward Bond, then after his death, by John McIntire); the frontier scout (first Robert Horton, then Scott Miller and Robert Fuller); and the lead wagon driver (Frank McGrath). Inspired by John Ford's The Wagonmaster, the hour-long series (expanded to 90 minutes during the 1963-64 season) was shot on location in the San Fernando Valley and produced by MCA, giving the episodes a cinematic sheen. For three years Wagon Train placed a close second to Bonanza before becoming the most popular series in the nation during the 1961-62 season. The show left the air in 1965 after 284 episodes.

MacDonald, J. Fred. Who Shot the Sheriff? The Rise and Fall of the Television Western. New York, Praeger, 1967.

More summaries and resources for teaching or studying Wagon Train.

Wagon Train from Gale. ©2005-2006 Thomson Gale, a part of the Thomson Corporation. All rights reserved.