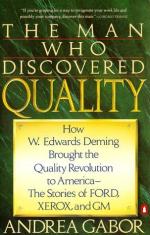 W. Edwards Deming - Research Article from Science and Its Times

This encyclopedia article consists of approximately 1 page of information about W. Edwards Deming.

American statistician and management consultant who developed an influential theory of management based on statistical quality control. Deming, who was trained as a physicist, became interested in management theory while working for the Department of Agriculture, the Census Bureau, and other United States government agencies. His theory of quality control, which was especially popular in the Japanese business world, stresses improving the interdependencies within a system and reducing variation on the basis of statistical sampling data.

W. Edwards Deming from Gale. ©2005-2006 Thomson Gale, a part of the Thomson Corporation. All rights reserved.