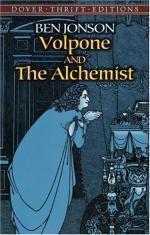 Volpone - Research Article from World Literature and Its Times

Ben Jonson
This encyclopedia article consists of approximately 21 pages of information about Volpone.

Ben Jonson, by common consensus the greatest Renaissance playwright after Shakespeare, was born the stepson of a bricklayer in 1573. In the late 1590s after some years in the occupation of a bricklayer himself and of a soldier, Jonson turned to literature. His comedies satirizing contemporary London earned him popular acclaim, while his lyric poetry won him friends and patrons in aristocratic circles. By the 1610s, Jonson was King James Is favorite playwright, largely on account of the splendid entertainments, called masques, that he produced for the court. Embittered by a decline in his popularity, and enfeebled by a stroke, Jonson died in 1640, leaving behind a body of highly lauded poems and comedies. Volpone is generally regarded as the pinnacle of his achievement. He wrote the play at a feverish heat, taking a mere five weeks in 1605 to produce the comic masterpiece.

Volpone from Gale. ©2008 Thomson Gale, a part of the Thomson Corporation. All rights reserved.