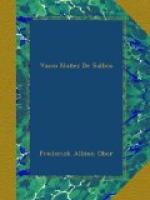 Like most explorers of his time, Vasco Núñez de Balboa came to the New World in search of riches. He was successful, though he soon fell into poverty and eventually met a violent end. When Balboa climbed a mountain to view the Pacific Ocean for the first time, he was reportedly accompanied by only his dog, Leoncico.

Expedition to the New World

Balboa was born at Jerez de los Caballeros, a town in the Spanish province of Extremadura. Coming from a family of impoverished gentry, he served as a page to a Spanish nobleman, Don Pedro Puertocarrero. In 1501 he left Spain with the expedition of Rodrigo de Bastidas, who had been inspired by reports from Christopher...

Vasco Núñez de Balboa from UXL. ©2005-2006 by U•X•L. U•X•L is an imprint of Thomson Gale, a division of Thomson Learning, Inc. All rights reserved.