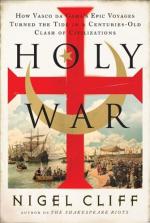 This encyclopedia article consists of approximately 7 pages of information about Vasco da Gama.

Little is known about the early life of Vasco da Gama, who was born around 1460 at the seaport of Sines, Portugal, where his father, Estevao da Gama, was civil governor; his mother was of English descent. He probably received the typical upbringing of a young nobleman of his time in military and court life. He studied mathematics and navigation, although there is no record of his commanding a ship before being chosen by King Manuel I for his historic passageway to the East.

When King Manuel I ascended to the Portuguese throne in 1495 at the age of 26, Bartolomeu Dias had already rounded the southern tip of Africa and Christopher Columbus (see separate entries) had sailed to the Americas three years earlier. Although the pope had granted Portugal first rights to the Orient, the Portuguese feared the...