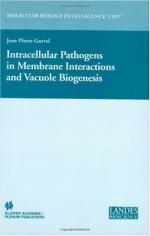 This encyclopedia article consists of approximately 2 pages of information about Vacuoles.

The term vacuole in biology refers to a membrane bound space, filled with liquid, often located in the center of a cell. Vacuoles are especially prominent in plant cells where they may occupy 95% or more of the cell volume. The vacuole was long considered to be merely a site in which plants disposed of waste material. This view began to change in the 1960s when researchers discovered that vacuoles often serve as protein storage centers. It was found that during embryo formation and seed development, proteins accumulate in the vacuoles of some cells in the cotyledons, or seed leaves, of dicotyledons (flowering plants with two cotyledons per embryo). When the seed germinates, enzymes called proteases are synthesized in the cytoplasm and moved to the vacuole where they digest the stored protein, releasing amino acids needed by the growing plant. It has also been discovered that some vacuoles store carbohydrates for later use as an energy source for the plant. In more mature plant cells, the content of the vacuole, called cell sap, contain a water solution of salts and sugars at sufficiently high concentrations to attract the entry of water into the vacuole, via osmosis. This creates turgor pressure that presses the cell membrane against the cell wall, creating the force needed to expand the volume of growing cells. Turgor pressure also contributes to the rigidity of mature plant tissue.

Some protozoans contain an organelle called a contractile vacuole that enlarges with the influx of water and then discharges its contents to the exterior of the organism when it reaches a certain volume. This cycle of filling and discharging may occur as often as every 30 seconds. The contractile vacuole functions in osmotic regulation by preventing excess water from entering the organism and swelling it beyond a viable size.

More summaries and resources for teaching or studying Vacuoles.

Vacuoles from Gale. ©2005-2006 Thomson Gale, a part of the Thomson Corporation. All rights reserved.