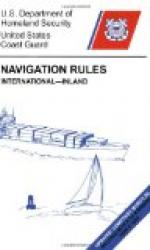 This encyclopedia article consists of approximately 2 pages of information about U.s. Coast Guard.

Established in 1790 as the Revenue Marine Service but named as such after combination with the U.S. Lifesaving Service, the U.S. Coast Guard provides support for the protection and preservation of the United States' marine and natural resources. Although a branch of the armed forces, the agency operates under the jurisdiction of the Department of Transportation during times of peace. The agency is responsible for managing the nation's seas and coastal waters, with environmental issues primarily handled by two offices: Marine Safety, Security, and Environmental Protection, and Law Enforcement and Defense Operations. Two primary agency functions are the enforcement of environmental laws (e.g., Clean Water Act, Marine Protection, Research, and Sanctuaries Act, and Oil Pollution Act) and the provision of an emergency response system to mitigate the release of pollution (e.g., garbage discharges, hazardous substance releases, and oil spills) into seas and coastal waters. With respect to enforcement, the agency enforces U.S. environmental laws along with all treaties and international agreements that allow the Coast Guard to assess penalties for violations under the law. With respect to its emergency response system, the agency is proactive by serving as a lead agency under the National Oil and Hazardous Pollution Plan by coordinating federal, state, local, and responsible party resources in conducting spill response efforts in the containment, removal and disposal of oil, and hazardous substance discharges in the country's coastal zone areas. The agency also assesses movements of potential pollutants (e.g., discharges and spills), accounts for wind and ocean currents, and evaluates potential chemistry changes due to those caused by evaporation, mixing, and sunlight.

U.s. Coast Guard from Macmillan. Copyright © 2001-2006 by Macmillan Reference USA, an imprint of the Gale Group. All rights reserved.