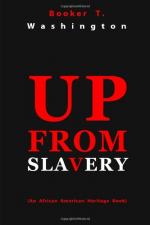 Up from Slavery - Research Article from Literature and Its Times

Booker T. Washington
This encyclopedia article consists of approximately 13 pages of information about Up from Slavery.

Ateacher and former slave, Booker T. Washington founded and ran the Tuskegee Institute beginning in 1881, a school for African Americans in rural Alabama. Building on the school's success, Washington rose to prominence in the 1890s, winning recognition as the nation's leading African American spokesperson after the death of Frederick Douglass in 1895. In 1901 Washington published his autobiography, Up from Slavery. The book conveys his practical approach to black self-improvement, an approach that called for cooperation and compromise with white society.

Slavery. In the years before the Civil War, slaveowners (who amounted to about one-fourth of Southern whites) controlled every aspect of the slave's life. Slaves were considered property and lived in often squalid conditions in shacks or barracks on the large plantations. They worked the fields, did the laundry, cooked the food...

Up from Slavery from Gale. ©2008 Thomson Gale, a part of the Thomson Corporation. All rights reserved.