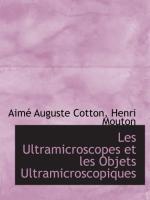 This encyclopedia article consists of approximately 1 page of information about Ultramicroscope.

The ultramicroscope is a tool used for viewing very small particles or objects that are too minute to be seen through a conventional microscope. When first invented it was the most powerful device available for observing such specimens, but it has since been surpassed in effectiveness by the electron microscope.

The ultramicroscope was invented by the German chemist Richard Zsigmondy, an industrial researcher at the Schott Glass Manufacturing Company, which provided specialized glass for the optical equipment built at the renowned Zeiss Optical Works. Zsigmondy had become interested during college in colored glass: it was suspected that tiny particles suspended in glass produced glass tints, but the extremely small size of the particles made them impossible to examine under a microscope. Conventional compound microscopes view beams of light reflected off or through a sample; thus, in order to be resolved by a microscope, the object must be at least the size of one wavelength of visible light. Since most particles in colloid compounds--such as colored glass--are smaller than a wavelength, they are beyond the resolving power of any conventional microscope.

Zsigmondy found that colloid particles, when placed within the path of a beam of light, would scatter that light, and that the particles could be viewed as tiny bright dots against a dark background (like motes of dust swirling in a beam of sunlight). This method, called dark-field illumination, is the basis of ultramicroscopy. The ultramicroscope shines a strong horizontal beam (such as that from an arc lamp) upon the subject particles. The rays scattered by the particles are brought together by a series of condensing lenses and are then focused through a final eyepiece lens. Particles as small as 10 millionths of a millimeter can be observed through an ultramicroscope.

More summaries and resources for teaching or studying Ultramicroscope.

Ultramicroscope from Gale. ©2005-2006 Thomson Gale, a part of the Thomson Corporation. All rights reserved.