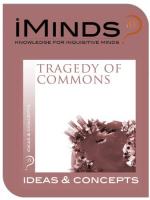 Tragedy of the Commons - Research Article from Pollution A to Z

This encyclopedia article consists of approximately 2 pages of information about Tragedy of the Commons.

The term tragedy of the commons was coined by Garrett Hardin who hypothesized in 1968 that, as the size of the human population increased, there would be mounting pressures on resources at the local and global levels, leading to overexploitation and ruin. Partly the tragedy would occur because some "commoners" (or users of common resources) would reap the full benefit of a particular course of action while incurring only a small cost, while others would have to share the cost but receive none of the benefits. The classic examples of such overexploitation are grazing, fishing, and logging, where grasslands, fish stocks, and trees have declined from overuse. Hardin suggested that governmental intervention and laws could become the major method of solving such overexploitation. More recently, the concept of the commons has been expanded to include air, water, the Internet, and medical care.

Much controversy has developed over whether commoners are caught in an inevitable cycle of overexploitation and destruction of resources, or whether the wise use and management of natural resources are possible. Although many examples of overexploitation exist, particularly in fisheries, Elinor Ostrom, Bonnie McCay, Joanna Burger, and others have argued that there are also examples of local groups effectively managing commonly held resources, and that such local control requires accepted rules, with appropriate sanctions and some governmental control to prevent exploitation by outside interests. That is, a fishing cooperative can succeed only if outside fishermen agree to adhere to existing rules or laws. In an age with increasing populations, understanding how different societies and groups have managed a common pool of resources allows us to apply successful methods in managing these resources.

More summaries and resources for teaching or studying Tragedy of the Commons.

Tragedy of the Commons from Macmillan. Copyright © 2001-2006 by Macmillan Reference USA, an imprint of the Gale Group. All rights reserved.