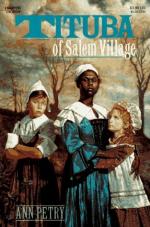 Tituba of Salem Village - Research Article from Literature and Its Times

This encyclopedia article consists of approximately 15 pages of information about Tituba of Salem Village.

Born in Old Saybrook, Connecticut, in 1908, Ann Petry grew up in one of the small town's only two black families. She moved to the predominantly poor, black community of Harlem, New York, in 1938. Tituba of Salem Village is one of the author's many novels that focus on the lives of black people and the racial tensions of American society. Although it chronicles the seventeenth-century Salem witch trials, the novel concerns issues that reappear in twentieth-century America.

Puritanism in colonial Massachusetts. Puritanism was a Protestant sect that had its roots in sixteenth-century England. It originally grew from a desire to "purify" the country's national religious institution, the Church of England. Puritans wanted to eliminate all the church's similarities to Catholicism by simplifying worship, reducing its elaborate administrative hierarchy, and employing...

More summaries and resources for teaching or studying Tituba of Salem Village.

Tituba of Salem Village from Gale. ©2008 Thomson Gale, a part of the Thomson Corporation. All rights reserved.