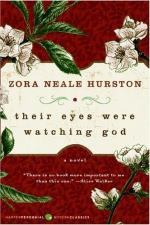 Zora Neale Hurston
This encyclopedia article consists of approximately 15 pages of information about Their Eyes Were Watching God.

Probably born in 1901, Zora Neale Hurston was raised in Florida. She moved to New York in 1925, becoming one of the foremost writers during the Harlem Renaissance, the creative outpouring of works by black artists, thinkers, and musicians of the 1920s. In 1927 Hurston took the first of many trips from Harlem, New York, to the South, where her experiences would inspire her to write an assortment of novels, plays, short stories, essays, and collections of folklore over the next twenty years. Midway through this period, she completed her third novel, the partly autobiographical story for which she is best remembered-Their Eyes Were Watching God.

More summaries and resources for teaching or studying Their Eyes Were Watching God.

Their Eyes Were Watching God from Gale. ©2008 Thomson Gale, a part of the Thomson Corporation. All rights reserved.