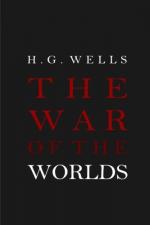 H. G. Wells
This encyclopedia article consists of approximately 14 pages of information about The War of the Worlds.

He G. Wells was born in 1866 to a poor family living near London, England. He was apprenticed to menial jobs before beginning his studies at the Normal School of Science in 1884 under the tutelage of Thomas Henry Huxley, a controversial zoologist. Although a promising pupil, Wells considered himself a failure as a student: "[Lacking] the character or the capacity for a proper scientific career, I had convinced myself that I was a remarkable wit and potential writer" (Wells, Experiment in Autobiography, p. 238). Wells's exposure to science fostered what he called his prophetic habit of mind, a preoccupation with how things will take shape in the future. His science fiction stories, including The War of the Worlds, seem a product of this habit. More fantastic than scientific, they carry evolutionary theory to horrific conclusions.

The War of the Worlds from Gale. ©2008 Thomson Gale, a part of the Thomson Corporation. All rights reserved.