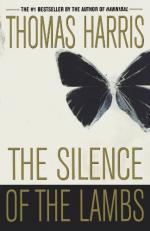 The Silence of the Lambs - Research Article from St. James Encyclopedia of Popular Culture

Thomas Harris
This encyclopedia article consists of approximately 1 page of information about The Silence of the Lambs.

The film The Silence of the Lambs, directed by Jonathan Demme and starring Jodie Foster and Anthony Hopkins, was released in the winter of 1991 to substantial financial and critical success. The film is based on a 1988 novel by Thomas Harris, which in turn is a sequel to Harris's 1981 best-seller on similarly themed material, Red Dragon. Both novel and film focus on the strange emotional and intellectual connection between a female FBI Academy student, Clarice Starling, and an imprisoned serial killer, Dr. Hannibal "The Cannibal" Lecter. The two work together to apprehend another serial killer, known in the tabloid press as "Buffalo Bill," before he can kill his next female victim. The film version not only introduced Dr. Lecter into the ranks of popular culture villains but garnered the top five Oscars during the 64th annual Academy Awards in 1992. The film won for Best Picture, Best Actor (Hopkins), Best Actress (Foster), and Best Adapted Screenplay (Ted Tally).

The Silence of the Lambs from Gale. ©2005-2006 Thomson Gale, a part of the Thomson Corporation. All rights reserved.