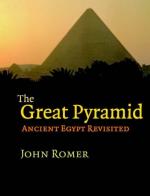 This encyclopedia article consists of approximately 8 pages of information about The Pyramids of Ancient Egypt.

One of the most enduring accomplishments of early civilizations was the creation of monumental architecture in the form of pyramids, a shape that has fascinated humans ever since. The Greeks and Romans considered the Great Pyramid at Giza in Egypt as the most impressive of the seven wonders of the world. Even today, a pyramid is printed on the back of American dollar bills, and in the 1980s, a glass and steel pyramid was built in the courtyard of the Louvre in Paris as a new entrance to the museum. Although pyramids were constructed in the ancient world in areas as far apart as Peru, Central America, Mesopotamia, and Indonesia, those built in the Old Kingdom of Egypt have drawn the most attention in the Western world.

Although the pyramids of ancient civilizations were massive structures, their most...

More summaries and resources for teaching or studying The Pyramids of Ancient Egypt.

The Pyramids of Ancient Egypt from Gale. ©2005-2006 Thomson Gale, a part of the Thomson Corporation. All rights reserved.