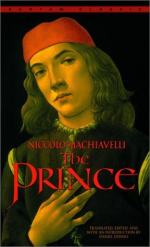 The Prince
Order our The Prince Encyclopedia Article

The Prince - Research Article from Literature and Its Times

Niccolò Machiavelli
This encyclopedia article consists of approximately 11 pages of information about The Prince.

Born in 1469, Niccolu Machiavelli entered public life for the first time in 1498. He proceeded to achieve the post of First Secretary of the Republic. He later became Head of Second Chancery, an official who was partly in charge of the war office. While in these positions, Machiavelli was entrusted with several foreign missions. His responsibilities often included traveling on diplomatic errands to foreign states. He never distinguished himself as an outstanding diplomat, but made use of his keen abilities of observation and analysis to learn about power. By traveling to Rome and foreign lands such as France and Germany, Machiavelli gained a political education that very few men of his time were privy to. These experiences proved to be of great value in his later writings.

More summaries and resources for teaching or studying The Prince.

The Prince from Gale. ©2008 Thomson Gale, a part of the Thomson Corporation. All rights reserved.