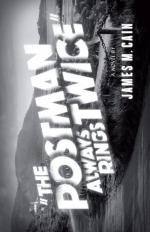 James M. Cain's (1892-1977) controversial bestseller The Postman Always Rings Twice (1934) is an erotic and violent story about a waitress and a drifter who kill the woman's well-heeled, unattractive older husband. Cain's novel is central to the hard-boiled novel/film noir tradition in American popular culture. As in many novels in this genre, an amoral hero falls victim to his own powerful sexual attraction to a beautiful femme fatale. L'amour fou (obsessive love) is at the heart of much of Cain's writing, making it eminently adaptable to film noir—a genre where amorality, violence, and a malevolent fate hang over its often psychologically realistic, morally ambiguous characters.

Lana Turner and John Garfield in a scene from the film The Postman Always Rings Twice.

Cain's novel has been adapted four times to film: as Ossessione by Luchino Visconti in 1942 (unavailable until very recently because of copyright problems), under its original title in 1946 by Tay Garnett (staring Lana Turner and John Garfield), in 1981 by Bob Rafelson (starring Jessica Lange and Jack Nicholson), and by Marcus DeLeon, in an uncredited version, as Kiss Me a Killer in 1991.

More summaries and resources for teaching or studying The Postman Always Rings Twice.

The Postman Always Rings Twice from Gale. ©2005-2006 Thomson Gale, a part of the Thomson Corporation. All rights reserved.