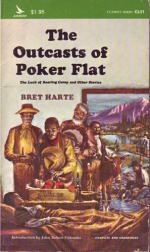 Bret Harte
This encyclopedia article consists of approximately 13 pages of information about "The Outcasts of Poker Flat".

Francis Bret Harte was born in 1836 in Albany, New York. After moving to San Francisco with his family in 1854, Harte began his literary career as a "printer's devil," a person who set the type for the printing presses of local newspapers. Harte wrote articles for several small newspapers, then left San Francisco to teach school in a Sierra mining town. He may have spent a short time prospecting during this period. Harte eventually returned to San Francisco, where he was encouraged by the editor of a local periodical, the Overland Monthly, to write stories about the gold rush mining camps that he had seen firsthand. In 1868 Harte's story, "The Outcasts of Poker Flat," was published in the Overland Monthly and became an instant success.

More summaries and resources for teaching or studying "The Outcasts of Poker Flat".

"The Outcasts of Poker Flat" from Gale. ©2008 Thomson Gale, a part of the Thomson Corporation. All rights reserved.