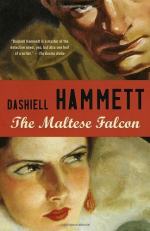 The Maltese Falcon - Research Article from Literature and Its Times

Dashiell Hammett
This encyclopedia article consists of approximately 11 pages of information about The Maltese Falcon.

After a series of unsatisfying jobs, Dashiell Hammett became an agent for Pinkerton's National Detective Agency in 1915. Hammett enjoyed the thrill of the sometimes dangerous job and worked, as his health permitted, on and off as a Pinkerton detective for the next seven years. When poor health forced him to end his employment at Pinkerton's, Hammett began writing detective stories, using his real-life experience as source material. After becoming a leading contributor to the popular magazines of the period, Hammett turned his attention to writing novels. His third novel, The Maltese Falcon, remains to this day one of the most widely recognized and respected works of detective fiction.

The rise of the private eye. The private investigator in America began with Pinkerton's National Detective Agency, the largest private law enforcement agency in...

More summaries and resources for teaching or studying The Maltese Falcon.

The Maltese Falcon from Gale. ©2008 Thomson Gale, a part of the Thomson Corporation. All rights reserved.