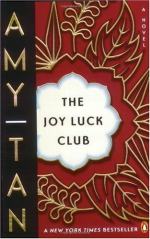 The Joy Luck Club - Research Article from Literature and Its Times

Amy Tan
This encyclopedia article consists of approximately 13 pages of information about The Joy Luck Club.

The years following World War II brought a surge in immigration from the Chinese mainland to the West Coast of the United States. This was in part due to the 1943 repeal of the Chinese Exclusion Act, and was later compounded by civil war in China and its eventual communist takeover in 1949. Once in America, many Chinese immigrants families began to produce a generation of American-born children. Amy Tan, born in Oakland, California, in 1952, was part of this wave. She wrote The Joy Luck Club in 1989, by which time Tan was married and had begun to write fictional stories after forgoing a career as a technical writer. Her novel reflects the real-life experiences of postwar Chinese immigrants and their daughters.

The Chinese Revolution. By the turn of the twentieth century, China...

The Joy Luck Club from Gale. ©2008 Thomson Gale, a part of the Thomson Corporation. All rights reserved.