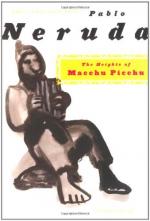 This encyclopedia article consists of approximately 20 pages of information about The Heights of Macchu Picchu.

Pablo Neruda was born Neftalí Ricardo Reyes Basualto in Parral, Chile, in 1904. He gained fame 20 years later with the publication of his second book of poetry, Veinte poemas de amor y una cancion desasperada (Twenty Love Poems and a Song of Despair, 1969). By 1946, when he wrote Alturas de Macchu Picchu, or The Heights of Macchu Picchu, Neruda had become one of the most celebrated Latin American poets. The poem marks a new development in an illustrious career. In it, Neruda fully sheds the private, often surrealistic style of his youth, and assumes the mantle of a public, political poeta role he would continue to play until his death in 1973.

Inca Empirelegacy of stone. Although the poem presumably takes place on the day in November 1943 that Neruda...

More summaries and resources for teaching or studying The Heights of Macchu Picchu.

The Heights of Macchu Picchu from Gale. ©2008 Thomson Gale, a part of the Thomson Corporation. All rights reserved.