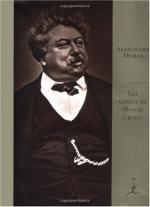 Alexandre Dumas, père
This encyclopedia article consists of approximately 13 pages of information about The Count of Monte Cristo.

Alexandre Dumas was born in a small village in France in 1802, the son of General Alexandre Dumas, Napoleon's famous mulatto general. The younger Dumas led a life almost as romantic as his novels; he took part in the Revolution of 1830, fought several duels in the course of his life, and fled creditors in France after his excessive spending exhausted his financial resources. Elements of The Count of Monte Cristo seem to be drawn from Dumas's own background, working to bring the novel to life.

The rise and fall of Napoleon. Napoleon Bonaparte was born on Corsica, a French island off the west coast of Italy, in 1769. After receiving an education in French military schools, Napoleon became an artillery officer in the French army and eventually climbed the...

The Count of Monte Cristo from Gale. ©2008 Thomson Gale, a part of the Thomson Corporation. All rights reserved.