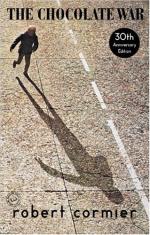 The Chocolate War - Research Article from Literature and Its Times

Robert Cormier
This encyclopedia article consists of approximately 11 pages of information about The Chocolate War.

Robert Cormier, born in Leominster, Massachusetts, in 1925, would later raise a family of three daughters and a son there. During his adolescence, Robert Cormier's own son objected to participation in his school's candy sale. While the boy did not suffer the extreme humiliation that the novel's Jerry Renault undergoes, he did feel a certain amount of alienation from his peers. Building on this premise, the elder Cormier created his fourth novel, The Chocolate War, a work that focuses on the sometimes cruel nature of adolescent societies and the consequence of individual choice in a communal world.

Adolescents and popular fiction. Although adolescent novels such as The Chocolate War now line the shelves of bookstores and libraries nationwide, young readers did not always have such literature at their disposal. In fact, relative to...

The Chocolate War from Gale. ©2008 Thomson Gale, a part of the Thomson Corporation. All rights reserved.