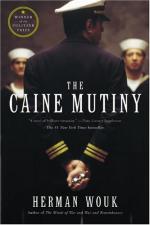 The Caine Mutiny - Research Article from Literature and Its Times

Herman Wouk
This encyclopedia article consists of approximately 12 pages of information about The Caine Mutiny.

Herman Wouk was born May 27, 1915, in New York to Jewish immigrant parents. After graduating from Columbia University, he wrote jokes for radio comedians, and then he began to compose scripts. By 1941 Wouk was writing radio plays to promote war bonds. During World War II, he served as an officer in the U.S. Navy (1942-46) on a destroyerminesweeper in the Pacific. Wouk would later base his prize-winning novel The Caine Mutiny on this wartime naval experience.

Japanese industrial power. During the centuries when European empires were adding countries to their rosters of colonies, Japan was the only Asian land that managed to resist Western economic and political encroachment. Until the late 1800s, Japan's leaders had successfully protected their feudal island nation from outside influences. At the end of that century, however, they...

More summaries and resources for teaching or studying The Caine Mutiny.

The Caine Mutiny from Gale. ©2008 Thomson Gale, a part of the Thomson Corporation. All rights reserved.