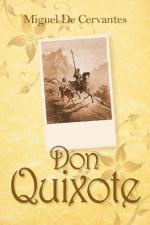 Miguel de Cervantes
This encyclopedia article consists of approximately 12 pages of information about The Adventures of Don Quixote.

Miguel de Cervantes Saavedra lived through two distinct periods in Spanish history. The first was a "golden age" of military success, national pride, and intellectual freedom; the second, a time of economic and military weakness and religious and intellectual repression. Don Quixote (pronounced "kee-hotay") was written at the end of his life and in the midst of the second of these periods. Spain at that time was in a state of desengano (a word meaning both "disillusion" and "disappointment"); the Spanish people realized by 1605 that the powerful empire of the previous century had been built on a shaky foundation-and that the foundation was crumbling.

Decline of the Spanish empire. In 1547, the year Cervantes was born, Spain was ruled by King Charles I, who was also the...

More summaries and resources for teaching or studying The Adventures of Don Quixote.

The Adventures of Don Quixote from Gale. ©2008 Thomson Gale, a part of the Thomson Corporation. All rights reserved.