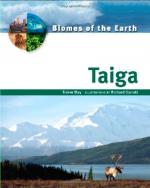 This encyclopedia article consists of approximately 1 page of information about Taiga.

Taiga is a Russian word used to describe the subarctic evergreen forest of Siberia and other similar forest regions around the world. Characterized by long, cold winters and short, wet summers, this biome (broad biological community) is generally species-poor and low in productivity. Trees only a few inches in diameter may be many decades old. Damage caused by forestry, mining, road-building, and other activities can take many years to heal. Conifers (cone-bearing evergreens such as pine, spruce, and fir) and a few deciduous species such as aspen, willow, birch, and alder are the main tree species in this community. The forest floor often is covered by mosses and other species adapted to short growing seasons, wet soil, and acidic conditions. Slow decomposition rates and lack of soil organisms lead to the formation of dense layers of peat in the extensive wetlands spread through the taiga. At its northern edge, the taiga forms a ragged, irregular border with the treeless arctic tundra. The sparsely scattered trees in this transition zone often are little more than a few feet tall and can be bent and tilted in weird patterns (sometimes called a drunken forest) where underlying permafrost prevents tree roots from gaining a firm hold in the ground. Among the predominant animal species of the taiga are woodland caribou, moose, bears, beaver, lynx, martin, and wolves. Swarms of biting insects during the summer can make the taiga a miserable place for both humans and other warm-blooded animals. Although it doesn't contain the highest amount of biomass, the taiga covers a larger area than any other forest type in the world.

More summaries and resources for teaching or studying Taiga.

Taiga from Gale. ©2005-2006 Thomson Gale, a part of the Thomson Corporation. All rights reserved.