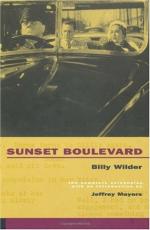 Axel Madsen writes of Sunset Boulevard (1950) that it is "a gnawing, haunting, and ruthless film with a dank smell of corrosive delusion hanging over it." A classic film noir, Sunset Boulevard is a cynical and decadent tragi-comedy narrated, in true noir fashion, by a dead man. Populated by faded silent movie stars like Gloria Swanson, Erich von Stroheim, and Buster Keaton, it is the story of a weak-willed writer (William Holden) who, in trying to escape his creditors, happens upon the mansion of a wealthy, but slightly mad, silent movie star who perpetually waits for a phone call from a studio which has long since forgotten about her. The handsome writer becomes a kept man who struggles to make it in the movie business, only to fall prey to his keeper as he tries to make his escape from her obsessive love for him.

Typical of Billy Wilder's sophisticated and cynical style, Sunset Boulevard is a black comedy about the casualties of the Hollywood dream machine, and those obsessed by fame and success in the cruel world of the movie studios. The film is filled with stylish settings and wonderfully biting dialogue, and it has attained the status of a cult classic with quotable lines like the famous, "I'm ready for my close up now, Mr. De Mille." There is also a Broadway musical version of the film created by Andrew Lloyd Webber.

More summaries and resources for teaching or studying Sunset Boulevard.

Sunset Boulevard from Gale. ©2005-2006 Thomson Gale, a part of the Thomson Corporation. All rights reserved.