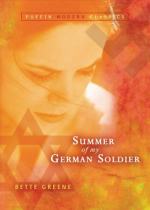 Bette Greene
This encyclopedia article consists of approximately 13 pages of information about Summer of My German Soldier.

Born June 28, 1934, in Memphis, Tennessee, Bette Greene grew up in a small town in the Arkansas Delta during World War II. Her friends thought her lucky because in this era of food rationing, her parents owned a country store stocked with candy and chewing gum. She, however, considered herself unlucky because her family differed from others in the area. Like the family featured in Summer of My German Soldier, hers was Jewish in a community full of Protestants. The era, as the novel indicates, was one of strong American prejudices against religious and racial minorities as well as against Germans.

More summaries and resources for teaching or studying Summer of My German Soldier.

Summer of My German Soldier from Gale. ©2008 Thomson Gale, a part of the Thomson Corporation. All rights reserved.