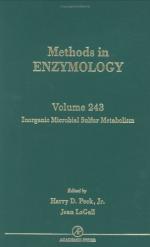 This encyclopedia article consists of approximately 8 pages of information about Sulfur.

Sulfur belongs to the chalcogen family. Other members of the family are oxygen, selenium, tellurium, and polonium. These elements make up Group 16 (VIA) of the periodic table. The periodic table is a chart that shows how chemical elements are related to each other.

The term chalcogen comes from two Greek words meaning "ore forming." An ore is a naturally occurring mineral used as a source for an element. Many ores are compounds of a metal and oxygen or a metal and sulfur. Compounds that contain two elements, one of which is sulfur, are called sulfides. For example, a beautiful gold-colored mineral is called pyrite, or "fool's gold," because it looks so much like real gold. Pyrite is iron sulfide (FeS2).

Sulfur was known to ancient peoples. Its physical and chemical properties are very distinctive. It...

More summaries and resources for teaching or studying Sulfur.