This encyclopedia article consists of approximately 1 page of information about Sulfur Cycle. 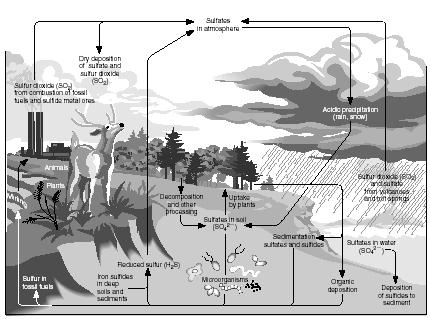 The series of chemical reactions by which sulfur moves through the earth's atmosphere, hydrosphere, lithosphere, and biosphere. Sulfur enters the atmosphere naturally from volcanoes and hot springs and through the anaerobic decay of organisms. It exists in the atmosphere primarily as hydrogen sulfide and sulfur dioxide. After conversion to sulfates in the air, sulfur is carried to the earth's surface by precipitation. There it is incorporated into plants and animals who return sulfur to the earth's crust when they die. Through their use of fossil fuels, humans have a large effect on the sulfur cycle, approximately tripling the amount of the element returned to the atmosphere.

More summaries and resources for teaching or studying Sulfur Cycle.

Sulfur Cycle from Gale. ©2005-2006 Thomson Gale, a part of the Thomson Corporation. All rights reserved.