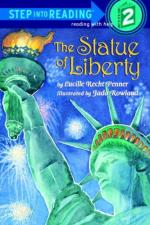 This encyclopedia article consists of approximately 11 pages of information about Statue of Liberty.

America's symbol of democracy and welcome to immigrants

"From her beacon-hand / Glows world-wide welcome …"

In New York Harbor, the Statue of Liberty, an elegant lady holding a torch to light the way for hundreds of thousands of European immigrants, is a stirring symbol of both the United States and its welcoming embrace of "huddled masses yearning to breathe free." The image of the statue is widely reproduced as a celebration of the American political system and the country's history as a collection of immigrants who together built a new nation on the North American continent. Like written documents such as the Declaration of Independence (1776) declaring that "all men are created equal," the Statue of Liberty has a long history behind its symbolism.

More summaries and resources for teaching or studying Statue of Liberty.