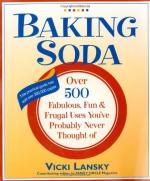 This encyclopedia article consists of approximately 4 pages of information about Sodium Bicarbonate.

Sodium bicarbonate (SO-dee-um bye-KAR-bun-ate) is a white, odorless, crystalline solid or powder that is stable in dry air, but that slowly decomposes in moist air to form sodium carbonate. The compound's primary uses are as an additive in human and animal food products.

More summaries and resources for teaching or studying Sodium Bicarbonate.

Sodium Bicarbonate from UXL. ©2008 by U•X•L. U•X•L is an imprint of Thomson Gale, a division of Thomson Learning, Inc. All rights reserved.