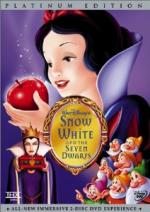 Walt Disney
This encyclopedia article consists of approximately 1 page of information about Snow White and the Seven Dwarfs.

Though criticized for the implied message that every girl needs a "prince" to rescue her, Walt Disney's first animated feature remains a classic. Debuting in 1937, the movie had a simple story line. Snow White escapes the murderous Queen and finds refuge with the Seven Dwarfs (Doc, Bashful, Sleepy, Sneezy, Happy, Grumpy, and Dopey). Learning she is alive, the Queen disguises herself and tricks Snow White into eating a poisoned apple. She apparently dies. A handsome prince, however, wakes her with a kiss. Reviewers criticized the human characters for being wooden, but the film broke ground in animation. The illusion of depth in the forrest scenes and such details as rain splashing on the ground had never been seen before. The movie proved animated features could be done and paved the way for later Disney films.

More summaries and resources for teaching or studying Snow White and the Seven Dwarfs.

Snow White and the Seven Dwarfs from Gale. ©2005-2006 Thomson Gale, a part of the Thomson Corporation. All rights reserved.