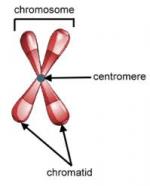 This encyclopedia article consists of approximately 1 page of information about Sister Chromatid Exchange.

During the S-phase of the cell cycle, DNA is replicated and each chromosome is present in a duplicated state with the two genetically identical chromatids joined together at the centromere. These two sister chromatids are readily apparent in late prophase or early metaphase of mitosis.

Sister chromatid exchange (SCE) is the process wherein the two sister chromatids break and rejoin with one another, physically switching positions on the chromosome. Because the exchanges occur with tremendous precision with respect to the DNA sequence, and the sister chromatids are genetically identical, no information is altered during the exchange. Such exchanges are natural events during cell replication with each cell typically undergoing three to four SCEs during each replication cycle.

SCEs can be visualized by growing cells in a medium, which contains the DNA base analog, bromodeoxyuridine (BrdUrd). BrdUrd closely resembles thymidine, and gets incorporated into the growing DNA strand during replication. Because replication of DNA is semiconservative, all of the BrdUrd is taken up into the newly synthesized strand, with the template strands remaining free of BrdUrd. During a second round of growth in BrdUrd medium, the two sister chromatids differ in the amount of BrdUrd present. The sister chromatid which has the original template strand of DNA has one strand of normal DNA and one which contains BrdUrd. The other sister chromatid has BrdUrd incorporated into both strands. With careful chemical and ultraviolet light treatment, the two sister chromatids can be distinguished from each other. SCEs can then be identified by differences in staining patterns.

SCE is useful for genetic toxicology studies as chemicals, that cause mutations, will often increase the frequency of SCEs. SCE may be used as a diagnostic test for the rare genetic disease called Bloom syndrome.

Sister Chromatid Exchange from Gale. ©2005-2006 Thomson Gale, a part of the Thomson Corporation. All rights reserved.